Until my recent move, I didn’t realize that moving is honestly one of the most unpleasant processes we humans put ourselves through, and I firmly believe that the only reason we keep doing it is because we forget how awful it was the last time. Pretty much everything that could have gone wrong when I moved a few weeks ago did, including:

So anyway, the move was a bitch. And the day after I went through the whole ordeal, I was faced with the distasteful tasks of painting the walls of my old apartment back to their original color and .

Why did I cross out that last bit, you ask? Because a couple weeks before the move I purchased a Groupon for a 2-hour housecleaning with a local service for the bargain price of $60.

And it was hands-down the best $60 I’ve ever spent.

Not only did the two sweet girls who showed up to clean my place do a kick-ass job, I was so exhausted from the previous night’s moving marathon that had I not Groupon-ed the cleaning, I might have made the rash, sleep-deprived decision to not clean it at all. At that point, I just wanted to be done, so it was such a relief to not have to worry about doing one more thing. So yeah, paying for the convenience of someone else giving my old apartment its last cleaning was well worth it.

I’ve been telling everyone I know that getting a Groupon for my move-out cleaning was the best $60 I’ve ever spent, but this got me thinking: what’s the best $60-ish you’ve ever spent? I bet there are some great stories there, so tell me yours in the comments below by Monday, August 26th at 5PM EST and you’ll be entered in a giveaway drawing to win a $50 Novica gift card.

Never heard of Novica? It’s a great site that offers beautiful, hand-made goods from around the world. Check out this cool lamp I got for my new place: 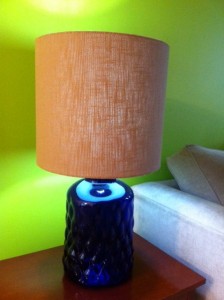 Ok, to recap: tell me in the comments below about the best $60-ish you’ve ever spent and you’ll be entered in a drawing to win a $50 Novica gift card. Hurry, the contest ends Monday, August 26, 5PM EST. As a bonus, if you tweet about the giveaway, you’ll gain an additional entry. Just paste the URL of your tweet into another comment.

Good luck, and I can’t wait to hear your stories 🙂