On Monday, the venerable Andrea at So Over This published a great piece about student loans. In it, she posited that a lot of people don’t really know what they’re signing on to when they start borrowing money for school at the tender age of 18, and that there’s a movement afoot to educate students about what it really means to be in so much debt. A lot of people (including me) totally agreed with Andrea that most 18-year-olds (again, including 18-year-old me) don’t know their heads from their asses when it comes to money. Some commenters suggested that parents should take a more active role in helping their children make informed financial decisions; a lot of commenters shared their experience with student loans. All in all, it was a wonderful post with a lot of great comments.

Of course, this wasn’t the point of Andrea’s post – her point was that students should be more carefully educated about the implications of this major financial decision. Again, I agree with this. But one commenter got my wheels turning about the possibility of universities (or the government, as I’ve heard people suggest in other posts) taking action to protect students from themselves: 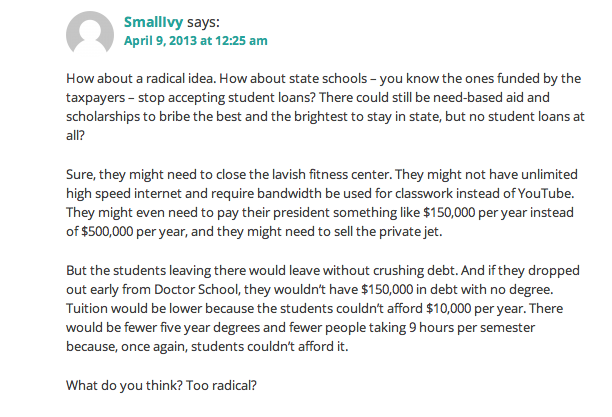 I understand what this commenter was getting at: since so many college graduates today are so deep in debt and can’t really be expected to have known as teenagers what they were getting themselves into, surely something must be done to keep people from getting in over their heads. While I generally tend to be of the opinion that government (or other, powerful institutions, like universities) have a responsibility to use their power to protect citizens/students, in this case I don’t think this principle is applicable. In fact, I think it’s downright wrong for students to be “protected” from over-borrowing.

Why? Well, very simply, I think it’s extremely presumptuous that anyone besides me could ever know what I can afford and what I can’t, or, for that matter, what I can expect to earn some day.

Let’s say, for example, that people were limited to borrowing what they can expect to make in the first year of their chosen profession, in accordance with a well-known personal finance rule-of-thumb. This is problematic in itself as earnings within a given field can vary wildly, but let’s just accept this as the basis of a hypothetical borrowing limit. In this case, a person studying to become a teacher would be limited to borrowing about $40,000. And let’s say that Suzanne wants to become a teacher, but it would cost her more than $40,000 in loans to finance that education at her chosen university. If borrowing limits were placed on Suzanne, she wouldn’t be able to borrow above $40,000. She’d have to transfer to a cheaper university or pick a different profession.

But guess what? We don’t know Suzanne (she’s made up, but just go with it). Suzanne might have a rich, old uncle who’s about to kick the bucket, upon which his wealth will become hers and she’ll have no problem paying off that $40,000+ figure. Or, maybe Suzanne has a great idea for a side business that she wants to start as soon as she graduates that will end up making her a pretty penny, thus allowing her to afford the payments on a loan much larger than $40,000. Perhaps Suzanne is an outstanding writer and gets a half-million dollar book deal, which, once again, would make $40,000+ seem like chump change. Any of these scenarios is possible, which is why I think Suzanne should be able to borrow as much as she sees fit for her education.

I guess what I’m trying to say is that it’s somewhat inappropriate for a person or entity who doesn’t know me to decide how hardworking, smart, and creative I am. I don’t think I – or anyone else – should have an anonymous third party making an arbitrary projection of what my earning potential is or what my personal circumstances are. Because really, no one knows what my future holds. Sure, it could hold a recession, a job loss, or a difficult family situation that makes holding down a job hard. But it could also hold a successful investment, a genius invention, or a large windfall from an as-yet-to-be-determined source.

That’s my gamble to take, and no one should roll the dice but me.