On Monday, I tried to spark a controversy about whether or not early retirement is the right goal to be pursuing. I’m sure that the statement itself revealed my sentiments about the matter, but in case it didn’t: I think that people who have the goal of retiring early have the wrong goal. I expected people to get angry, disagree, call me judgmental, and generally make a fuss. Imagine my surprise when that’s not what happened…at all! 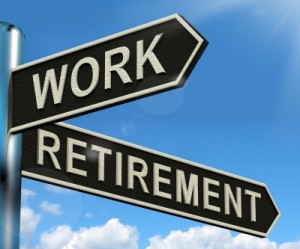 “I think you’re doing it wrong if your goal is ‘early retirement’ because you should find a career that you freaking love, however long that takes, and you shouldn’t WANT to leave it ASAP. Life is now, people, not 5, 10, 20, or 40 years in the future.

I like the idea of ‘financial independence,’ where you have the choice at some point in your future to leave a particular job, career, or situation that you are unhappy with and support yourself through retraining or changing directions. To me, that is a worthy goal, but not early retirement itself.”

Yes, I couldn’t agree more! It is totally ludicrous to me that people would aim for early retirement rather than looking for work that they actually enjoy. In fact, I find it interesting that a lot of people who claim to have “retired early” have really just moved into a different field, a field that brings them joy to work in. It’s as if we automatically associate “work” with being stressed and unhappy, that doing work that’s interesting, challenging, and fulfilling couldn’t possibly be actual work.

“Why sacrifice your life now, when you’re arguably at your healthiest, to live the good life later? I’ve never understood that. When I’m old and my health is failing is when I’m going to want to be lying around the front porch reading a book or drinking coffee, not now while I’m young. Now I want to travel and ride roller coasters and jump out of airplanes.”

This comment really encapsulates my confusion about why people fetishize retirement (early or otherwise) so much. I think that what people often forget when they’re planning for retirement that when you’re retired, you’re going to be at least somewhat old. Most people today think of “early” retirement as being able to exit the workforce in their fifties; while this is by no means old, there’s still a strong possibility that one’s health might not be optimal. If you set the goal of retiring in your fifties, you’re going to have to make significant sacrifices in your twenties and thirties – when you’re young, healthy, and energetic – to get there. To me, it’s not worth it.

But not everyone agreed that early retirement was the wrong goal – there was one ardent dissenter, Miss JJ. I cut her comment down to just one paragraph here because it was rather long, but feel free to go back to the original post and read the whole thing. Anyway, Miss JJ responded:

“Hello! I have never commented on your blog yet, but on this topic I will, because, you know, my goal IS early retirement.:)

My stand is this: First do no harm, then do whatever you want. What does it matter what I do after my retirement provided that I meet all my personal and social obligations and don’t leech off the system? Why DOES it have to be a career and nothing else? If I love vegetating in front of a TV after I retire, and it makes ME happy, and it doesn’t hurt anyone else or take anything away from anyone else, why is that a bad thing to aim for?”

Certainly, this is a valid point. Who’s to say that another’s goal is “right” or “wrong” as long as that goal is not putting anyone else in danger? And that’s something I want to be really clear about: setting the goal of early retirement isn’t wrong in a moral sense. Miss JJ is absolutely right that if she wants to hang out in front of the T.V., that’s her right, assuming she’s supporting herself. But my main objection to the goal of early retirement is that the person who sets such a goal is cheating herself out of of the immense social and psychological benefits that come from doing work that brings her personal meaning and fulfillment. In other words, work isn’t just about money. It’s also about meeting the innate need that humans have for self-actualization, which is why I think that people are kidding themselves when they think that retiring early will bring them the happiness they are pursuing.

I could go on about this, but I’ve made my basic feelings about the idea of early retirement pretty clear. Thank you to all who commented on my original post and if you didn’t get an opportunity to share your feelings before, you have a second chance now. Let’s revive this discussion as we all get excited about escaping from our jobs for the weekend 🙂 Happy Friday, and happy commenting!