It feels like at least once every week that I’m telling someone how much I love Craigslist. In the past year, I’ve gotten some really nice furniture from sellers on Craigslist (which you’re about to get a glimpse at!) for a mere fraction of what I would have paid had I bought these items in stores. The savings benefits of buying second-hand items are pretty obvious, but I also love the “hunt” involved in buying items from Craigslist. I’ve also written many times before about my love of haggling, and buying stuff from Craigslist should always involve haggling – if you’re not haggling, you’re doing it wrong!

Here are the furniture items I’ve purchased from Craigslist sellers in the past year. NOTE: The quality of the photos is not the best…there’s pretty much no good time of day to take a picture in my apartment. You either get sun glare during the day or shadows in the evening. So bear with me 🙂 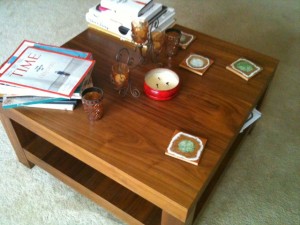 Next, my wine rack. Also from a guy in Capitol Hill, who originally purchased it from Crate and Barrel. He was asking $50, I paid $30. Obviously, the wine was not included: 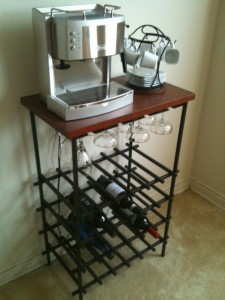 This next piece is what one of my friends calls my Sherlock Holmes chair. This was probably my shadiest transaction, as I had to meet the seller at her storage unit. But it was a good deal; it’s super comfortable for writing my blog posts in! She was asking $100, I paid $75. 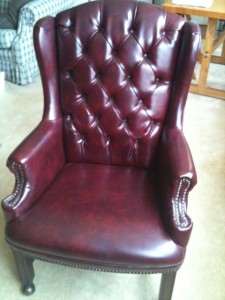 Ok, this next piece is probably the most polarizing piece of furniture ever. If you think it’s hideous, you’re in good company. About 50% of people who see it IRL think it is the tackiest thing they’ve ever seen, about 50% think it’s really beautiful. I can’t really explain why I love it, I just do. I bought this from a girl about my age who lives in Arlington for $200; this is the only item I paid full asking price for. My boyfriend and I had a hell of a time getting it out of her house and onto his truck, but it was worth it. Again, I inexplicably love it:

Finally, I purchased this piece just this past weekend. My boyfriend disapproves of this purchase, because I had a perfectly functional nightstand, but it was taking up space and had no storage. This one has a drawer and two shelves, so I think it was a good buy. Again, I got this from a guy in Capitol Hill; he was asking $40, I paid $30.  If you follow me on Twitter, you know that I replaced the knobs, which added about $7 to the total cost of this item: 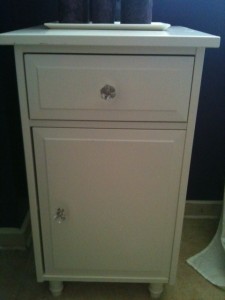 If you do the math, you’ll notice that I’ve paid $460 over the past year for total apartment overhaul. Again, this is steal compared to what I would have paid for similar items in-store.

Thinking of looking around on Craigslist for some new furniture? Here are some of my top tips:

1. Haggle, haggle, haggle! Unlike in a lot of other buyer/seller situations in the U.S., haggling is expected on Craigslist and it’s a great way to get a SUPER sweet deal. I paid almost 50% less than the seller’s asking price for my wine rack – the worst they can say is no!

2. Narrow your search to the nicest neighborhoods in your area. People that live in nice neighborhoods (like Capitol Hill) tend to have nice stuff. You’ll find some of your highest-quality Craigslist items in these neighborhoods, so keep your eyes peeled.

3. Don’t expect perfection. Remember that in most cases the stuff that you’re buying on Craigslist isn’t brand new, so there will be some dings and dents in most items. My wine rack, for example, has a pretty nasty scratch on the wood top…but I knew I would be putting my espresso maker over it, so I didn’t really mind.

4. Be patient. Craigslist is the proverbial craps shoot, so it’s unlikely that you’ll find the perfect item right away. Keep looking! It took me about six weeks to find my desk, but that’s part of the fun. Logging on every night and seeing what’s been added is part of the Craigslist experience. Embrace it!

5. Keep yourself safe. Always suggest meeting in a public place to conduct the sale, and NEVER wire anyone money before you have the item you’re buying. I must admit, before I read some scary stories, I met a few people at their houses. I went with my boyfriend a few times, a few times I went alone. The people were always totally harmless, but this is not advisable! If you must go to someone’s home, bring someone with you and tell your friends where you’re going.

So what about you? Do you buy stuff from Craigslist? Tell me your Craigslist stories!